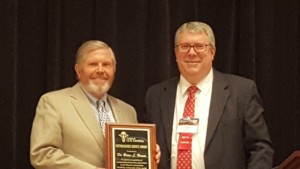 Brian L. Homer graduated from East High School in Salt Lake City in 1967. He attended the University of Utah, then served an LDS Mission to Ireland from 1968 to 1970. Upon completing his mission, he returned to the University of Utah. There he joined the Acapella Choir and had the opportunity to meet Ann Richards. They were married on St. Patrick’s Day 1971 and both graduated from the U of U in 1974. They are the parents of six children and dote over their 20 grandchildren.
Brian attended Tufts University School of Dental Medicine where he graduated, cum laude, in 1978. He joined the United States Air Force and was a Captain, stationed at Norton Air Force Base in San Bernardino, California, from 1978 to 1981. He practiced in Valley Center, California, for one year before returning to Utah to start a practice in Cottonwood Heights.
In 1983 Dr. Homer was invited by Dr. G. Lynn Powell to participate in the Regional Dental Education Program, offered through the University of Utah. He worked as an “attending dentist” with the General Practice Residency program, also offered through the University of Utah. This association has continued to the present.
In 1985, Dr. Homer became the editor of the UDAction newspaper, serving as an ad hoc member of the UDA board until 1988. He has been a member of the ADA, UDA and AGD throughout his career. He practiced full-time until 2014, when he joined the faculty of the University of Utah School of Dentistry as an adjunct clinical instructor in the clinic.
Dr. Homer’s greatest joy, after practicing advanced dentistry, came from being a member of the Mormon Tabernacle Choir (1988 – 2009). Ann joined the choir as well, and they sang together for seven years. This calling required much service, sometimes practicing six days a week. Tours were one to 24 days. He would close his practice and hope he still had patients when he got back.  Dr. Homer served on the Choir Medical Committee and always took supplies with him for dental emergencies. The Committee would coach choir members on good health, but there were always events or conditions that required their attention.
For the 2002 Olympics, Dr. Homer was privileged to be part of the medical/dental clinic for Olympic athletes, taking care of necessary treatment. Many athletes from 3rd world countries were aware of this service and “saved” up their needed treatment to be done in the US. Some nights the dental service didn’t end till near midnight.
Dr. Homer has volunteered at the Donated Dental Services Clinic and with the “Give Kids a Smile” program. He and Ann have traveled twice to work at the Liahona School Dental Clinic in Tonga in 2014 and 2015. In 2016 they went to Xi’on, China with a group organized by Dr. Karl Koerner. They taught Chinese dentists, as well as treated patients. These have all been amazing experiences. Those treated were always so appreciative for the care provided. Ann and Brian have made plans to go to the Philippines to serve with Dr. Craig Proctor this coming November.
Dentistry has been a great profession and it is an honor to be associated with such an outstanding group of individuals and try to serve the underserved. Many thanks to Dr. Gordon Christensen for gathering LDS dentists together and encouraging humanitarian service.